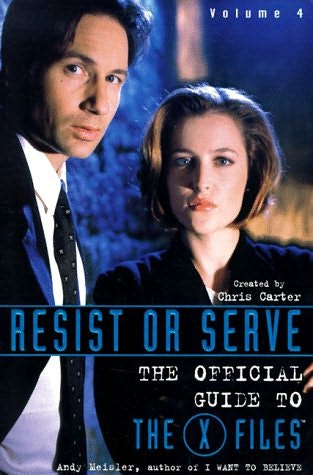 (1998)
The Official Guide to the X-Files, Volume 4
(A book in the X-Files Non Fiction series)
A non fiction book by Andy Meisler

For five seasons, The X-Filers has captivated viewers with its fascinating storylines, visual creativity, and superb characterizations. Now fans of the acclaimed dramatic series created by Chris Carter and staring David Duchovny and Gillian Anderson can find out all the behind-the-scenes details of the show's fifth season with this comprehensive and authoritative episode guide that includes:

Over 250 photographs-including eight pages of full-color photos-of Mulder, Scully, and the most evocative images from every episode

Richly detailed synopsis for every show-including dialogue, action sequences, and the most suspenseful plot twists

Plus, the most up-to-date information on the intricate new levels of conspiracy and deception which were revealed in the fifth season and culminated in the first X-Files feature film