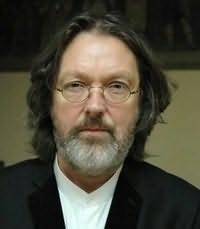 (b.1950)
Árni studied comparitive literature at the University of East Anglia. He has worked as a journalist since 1971, and sat on several panels of judges at international film festivals.
Árni's first novel, Nóttin hefur þúsund augu (The Night Has a Thousand Eyes) was published in 1989, the first of a series about the investigative journalist Einar. He was one of the authors of Leyndardómar Reykjavíkur 2000 (The Reykjavík 2000 Mystery), along with other members of "Hið íslenska glæpafélag" (The Society of Icelandic Crime Writers). He has also written with Páll Kristinn Pálsson: crime novels, and scripts for television, including Dagurinn í gær (Yesterday), which aired in 1999, and 20/20, which Óskar Jónasson directed for RÚV in 2002. The latter was nominated for four Edda awards (The Icelandic Film Awards), including best script. Árni has also published an interview book with filmmaker Hrafn Gunnlaugsson, and his translation of a book for teenagers by the Dutch writer Evert Hartman received the Reykjavík Scholastic Prize in 1984.
Novels
Season of the Witch (2012)