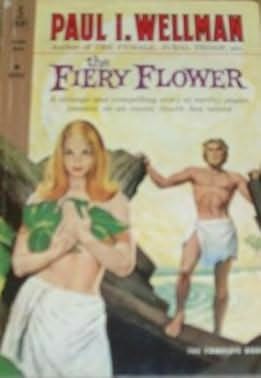 Her plane had plunged into the storm-torn Pacific. And when actress Elsa Meade awoke in the thatched hut, she beheld an incredible sight. Before her stood a half-naked, blond giant and a bare-bosomed, goddess-like beauty. He was Jon - part man, pat god, sole ruler of this tropic paradise. And she was Vera - his magnificent, savage-like mate. Who were they? Where had they come from? What did his plans and her violent jealousy hold for Elsa Meade? As she was forced to delve deeply into the secrets of this mad and mystic island, Elsa was to find a love, a horror, and a mystery no other woman has ever known.

Used availability for Paul I Wellman's The Fiery Flower