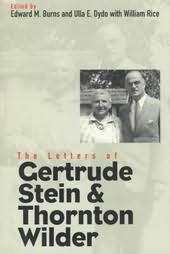 The Letters of Gertrude Stein and Thornton Wilder

Gertrude Stein, the great lesbian modernist, met Thornton Wilder when he was a young writer in search of a mentor. Stein became that mentor and helped Wilder shape his aesthetic into classic American plays such as Our Town and The Skin of Our Teeth. Begun during Stein's lecture tour of the U.S. in 1934, their friendship lasted until Stein's death 12 years later. These letters record Wilder's attempts to help Stein with publication and Stein's insistence that the writer's work is not teaching or lecturing or seeking fame, but writing. The Letters of Gertrude Stein and Thornton Wilder records not only a friendship, but also the writers' struggles with the position of their writing in American culture.