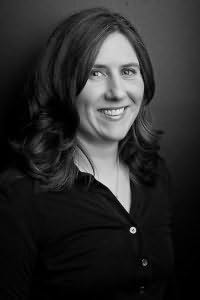 USA Today bestselling author Ruthie Knox writes contemporary romance thats sexy, witty, and angstysometimes all three at once. After training to be a British historian, she became an academic editor instead. Then she got really deeply into knitting, as one does, followed by motherhood and romance novel writing.

Her debut novel, Ride with Me, is probably the only existing cross-country bicycling love story. She followed it up with About Last Night, a London-set romance whose hero has the unlikely name of Neville, and then Room at the Inn, a Christmas novella both of which were finalists for the Romance Writers of Americas RITA Award. Her four-book series about the Clark family of Camelot, Ohio, has won accolades for its fresh, funny portrayal of small-town Midwestern life.Ruthie moonlights as a mother, Tweets incessantly, and bakes a mean focaccia.
Series
Caroline & West
1. Deeper (2014)
2. Harder (2014)