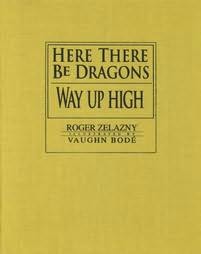 Added by 7 of our members

Here There Be Dragons / Way up High

(1992)
A collection of stories by Roger Zelazny

During a term as Secretary-Treasurer of Science Fiction Writers of America, Roger Zelazny, winner of six Hugo awards and three Nebula awards, met Vaughn Bode. Admiring each other's work, they joined forces in the creation of "Way Up High" and "Here There Be Dragons". Roger had written the stories in the late 1960s and found Vaughn's work ideally suited to his text.

Vaughn Bode once said of himself, "I am the crawly caterpillar, who is the cocoon, who is the butterfly, all at once. Right now ... Magick is with us all the time ..". Winner of a Hugo award, illustrator of countless comics, book covers, and magazines, Vaughn Bode died tragically in 1975.

Here at last are these two wonderful stories available as a two book numbered slipcased set each individually signed by Roger Zelazny. Way Up High is the moving story of a little girl's friendship with Herman, the last pterodactyl "Here There Be Dragons" is the lighthearted tale of a king who wants a dragon as a surprise at his daughter's birthday party and the one sensible knight in the kingdom who is charged with this task.


About Fantastic Fiction       Information for Authors