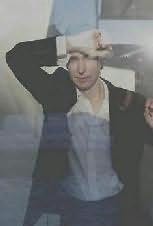 Sweden (b.1967)
Alexander Ahndoril was born in Stockholm 1967, he has been a student of film, religion and philosophy at the University of Stockholm. His debut as novelist was in 1989 (Den äkta kvinnan). After his second novel (Om hjärtat är vidrigt) he began to work full time as a writer. He is married to the writer Alexandra Coelho-Ahndoril; they have three daughters.The Director is Alexander Ahnoril's eighth novel.
Novels
The Director (2008)