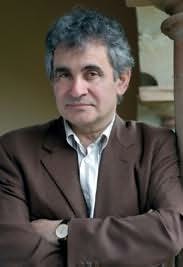 (José Irazu Garmendia)
Spain (b.1951)
Bernardo Atxaga is the pseudonym of Joseba Irazu Garmendia,was born in Asteasu, Gipuzkoa (Guipúzcoa, Basque Autonomous Community - Spain), in 1951. He received a diploma in economics from the University of Bilbao, and studied philosophy at the University of Barcelona. He worked as an economist, bookseller, professor of the Basque language, a publisher, and a radio scriptwriter until 1980 when he dedicated himself completely to writing.

His first text was published in 1972 in an anthology of Basque authors. His first short story, Ziutateak ("About The City"), was published in 1976. His first collection of poetry, Etiopia ("Ethiopia"), appeared in 1978. He has written plays, song lyrics, novels and short stories. His book of short stories, Obabakoak ("Individuals and things of Obaba"), published in 1988 won him much fame and several prizes, such as Spain's National Literature Prize. So far, the book has been translated into more than 20 languages.

Atxaga generally writes in the Basque language (Euskara), but translates his works into Spanish as well. Following the example of Obabakoak, several of his other works have been translated into other languages.

He currently resides in Reno (Nevada).

Picture Books
Shola and the Lions (2015)