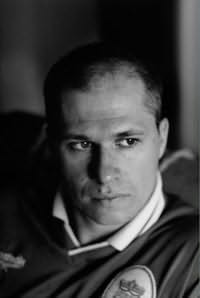 Bosnia and Herzegovina (b.1964)
Aleksandar Hemon is the author of The Lazarus Project, which was a finalist for the 2008 National Book Award and National Book Critics Circle Award, and three collections of short stories: The Question of Bruno; Nowhere Man, which was also a finalist for the National Book Critics Circle Award; and Love and Obstacles, which will be published by Riverhead Books on May 14, 2009.  Born in Sarajevo, Hemon visited Chicago in 1992, intending to stay for a matter of months. While he was there, Sarajevo came under siege, and he was unable to return home. Hemon wrote his first story in English in 1995. He was awarded a Guggenheim Fellowship in 2003 and a genius grant from the MacArthur Foundation in 2004.  He lives in Chicago with his wife and daughter.
Novels
Nowhere Man (2002)
The Lazarus Project (2008)
The Making of Zombie Wars (2015)

Chicago Noir (2005)
(Akashic Noir)
Neal Pollack
"If ever a city was made to be the home of noir, it's Chicago. These writers go straight to Chicago's noir heart."