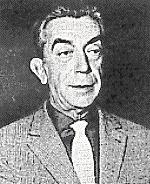 (Marcel André Aymé)
France (1902 - 1967)
Marcel Aymé was born in Joigny, France in 1902. Following his studies at the College de Dole he moved to Paris and worked, most notably, as a journalist. He was able to dedicate himself entirely to literature following the success of The Green Mare, a dark satire on sexuality published in 1933. Following the German occupation and the French resistance, his ironic, and often disillusioned perception of the state of affairs in France during this period, produced a body of work that is still placed at the forefront of twentieth century French literature. Marcel Ayme died in Paris in 1967.
Series
Wonderful Farm
1. The Wonderful Farm (1951)
2. Return to the Wonderful Farm (1954)