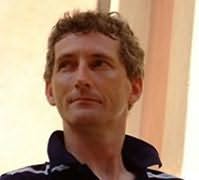 Peter Anghelides first published work was the short story "Moving On" in the third volume of the Virgin Decalog collections, which led to further short stories in the fourth collection and then in two of the BBC Short Trips collections that followed. In January 1998, his first novel Kursaal was published as part of BBC Books' Eighth Doctor Adventures series on books.
Anghelides subsequently wrote two more novels for the range, Frontier Worlds in November 1999, which was named "Best Eighth Doctor Novel" in the annual Doctor Who Magazine poll of its readers, and the The Ancestor Cell in July 2000 (co-written with departing editor Stephen Cole). The Ancestor Cell was placed ninth in the Top 10 of SFX magazine's "Best SF/Fantasy novelisation or TV tie-in novel" category of that year.