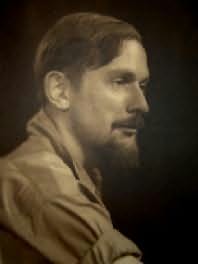 (1908 - 1983)
Frank Baker was born in Hornsey, London in 1908. Frank was educated at Wincester Cathedral School, where he enjoyed singing in Cathedral choir. He seems to have inherited a love of music from his grandfather who played the organ at nearby Alexandra Palace. As a young man Frank went into his father's business of marine insurance in City of London, before leaving after five years to spend a year working at the School of Church Music. With £20 and a small piano he moved down from London to Cornwall, and settled in a cottage at St. Just-in-Penwith, earning £1 a week as an organist. There he began to write. His first novel, 'The Twisted Tree' was published in 1935.

In addition to writing Frank Baker continued to play both piano and organ, and especially enjoyed playing at the Church at St.Hilary, where he developed a close friendship with Father Bernard Walke, who is known for his biographic, 'Twenty Years At St Hilary'. Here Frank and Bernard produced the first religious plays to be peformed live on BBC Radio.

For a while Frank became a professional actor. During the Second World War Frank toured with Dame Sybil Thorndike and Lewis Casson (whom he understudied) and Paul Scofield, and they played throughout the UK. At this time he met Kathleen Llyod whom he married in 1943. They were to have three children together, Jonathan, Llewellyn and Jospehine. After they first met, they lived together in Hampstead, and for 18 months Frank worked as the pianst for the Player's Theatre with performers Leonard Sachs, Hattie Jaques and others.

After the Player's Theatre the family returned to live in Mevagissey in Cornwall, for around 5 years. Frank was to subsequently live in Surrey and then returned to Cornwall again, living in Goldsithney and then moved to Cardiff in Wales. During these years he edited scripts and wrote plays for BBC, and continued to publish fiction. In 1969-1970 he spent some time in the USA and was Artist-in-Residence at the University in Oklahoma.

Frank was drawn back to Cornwall again and again, and eventually he and Kathleen finally settled in Porthleven. Both Frank's daughter, and many of his nine grand children, were born in Cornwall, a county which inspired him throughout his life. In his last book, 'The Call of Cornwall' (1976) he described what had inspired him to always return there, in an exploration of Cornwall's spiritual history, literature and landscape.