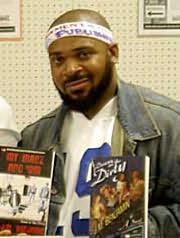 J.M. Benjamin is an ambitious and witty writer from Plainfield, New Jersey. He is the author of Down in the Dirty, which won the Best Street Novel of the Year Award in 2006, an honor bestowed to him by the African American Literary Awards Show. His sophomore novel, My Manz and Em was released in early 2007 and he has contributed to several anthologies: Menace II Society, Christmas 'N The Hood with Nikki Turner, and Hood Legends.
J.M.Benjamin has been compared to two literary greats; Claude Brown and Donald Goines for his ability to entertain and educate, and his passionate work ethics. J.M. Benjamin was released from prison, fully loaded and prepared to enter into a new game with the same drive and approach he had when he ran the streets. However, this time he has a different product to offer.
Susan Hampstead, Senior Editor of Don Diva Magazine is quoted as calling J.M. Benjamin "A new and exciting underground writer making noise, destined to solidify his spot in urban literature."
Readers familiar with Mr. Benjamin's work enjoy his uncanny ability to keep you in suspense, engulfed and entertained, and new fans will not be disappointed by his outstanding stories.