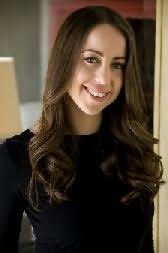 Jessica Brody is the author of THE FIDELITY FILES, which Ebury Press will publish in November 2008. At twenty-eight years old, Jessica is living out her childhood fantasy of becoming a writer. Jessica was born in Los Angeles, California and raised in Franktown, Colorado during her adolescence. She received her higher education from Massachusetts' elite women's school, Smith College, where she double majored in Economics and French. Prior to becoming published, Jessica worked in the field of strategic analysis for MGM Studio's Home Entertainment group in Los Angeles.

Confined by the lack of creative freedom in her secure, strategic analyst job and inspired by her passionate childhood memories of writing, Jessica gave up her job with MGM in May 2005 and began working on the story idea that would later develop into THE FIDELITY FILES. After a one-month stint living in Paris to focus on her writing and an extensive re-write of her manuscript upon her return to the States, Jessica Brody landed a contract at The Levine Greenberg Agency and sold her debut novel to St. Martin's Press in November 2006 (only 18 months after leaving her job).

Brody now works as a freelance writer and producer. Her first feature-length filmproduction, entitled Orgies and the Meaning of Life, will be screened at film festivalsin 2008 including the London Independent Film Festival in May. She currently writes for "Primetime in No Time," a hit TV recap show on Yahoo (http://primetime.tv.yahoo.com) and is working on her next novel, a sequel to THE FIDELITY FILES. Her first young adult novel, entitled The Karma Club, was just sold to Farrar Straus Giroux for US publication in Spring of 2010 and Jessica has also recently optioned a TV Movie script that she co-wrote with her father to producer Jeff Hayes (The Starter Wife, Nightmares and Dreamscapes) Jessica Brody lives in Los Angeles, California.

Non fiction
The Complete Guide to Getting Published (2014)
Save the Cat! Writes a Novel (2018)

Get Even (2014)
(Don't Get Mad, book 1)
Gretchen McNeil
"A revenge story with murder, mayhem, and Gretchen McNeil’s signature snark? Yes please! Gretchen proves once and for all that revenge is a dish best served deadly. Readers will be immediately sucked into the dangerously intriguing world of DGM and by the end they’ll be dying for the sequel."

Hard Wired (2020)
Len Vlahos
"Len Vlahos has penned a wildly inventive page-turner of a novel that cleverly blurs the lines between sci-fi and reality. It's Blade Runner meets Ex-Machina with a delightfully complex narrator who will upload right into your heart and never leave."