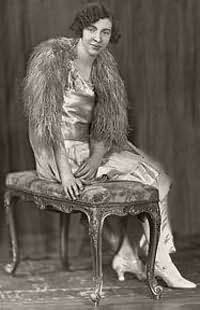 aka James Keene
Ida Cook was born on 1904 at 37 Croft Avenue, Sunderland, England. With her older sister Mary Louise Cook (1901), she attending the Duchess' School in Alnwick. Later the sisters took civil service jobs in London, and developed a passionate interest in opera.

A constant presence at Covent Garden, the pair became close to some of thegreatest singers of the era; Amelia Galli-Curci, Rosa Ponselle, Tito Gobbiand Maria Callas. They also came to know the Austrian conductor ClemensKrauss, and it was through he that Cooks learned of the persecution ofEuropean Jews. In 1934, Krauss's wife asked the sisters to help a friend toleave Germany. Having accomplished this, the sisters continued the goodwork, pretending to be eccentric opera fanatics willing to go anywhere tohear a favourite artist. Krauss assisted them, even arranging to perform incities they needed to visit. The sisters made repeated trips to Germany,bringing back jewellery and valuables belonging to Jewish families. Thisenabled Jews to satisfy British requirements as regards financial security -Jews were not allowed to leave Germany with their money. Using manytechniques of evasion, including re-labelling furs with London labels, thesisters enabled 29 persons to escape from almost certain death.

The Cooks' own finances were little precarious, and when Ida obtained acontract with Mills and Boon to published her first novel in 1936, she leftthe Civil Service to write full time. As Mary Burchell, she became aprolific writer of romantic fiction. Her great popularity helped the successof Mills and Boon, and guaranteed substantial income after the war. For manydecades, her writing supported her two passions: refugees and young operasingers. Her flat in Dolphin Square at various times housed homelessEuropean families.

In 1950, Ida Cook wrote her autobiography: "We followed our stars", and in1965, the Cook sisters were honoured as Righteous Gentiles by the Yad VashemMartyrs and Heroes Remembrance Authority in Israel, thus joining OskarSchindler among others.

She helped to found and was for many years president of the RomanticNovelist's Association. As Mary Burchell, she wrote over a hundred romancenovels, many of which were translated, and her most famous work is "TheWarrender Saga", a series about the opera world, full of real details.

Ida Cook passed away on December 22, 1986 and her sister Louise in 1991. They were honoured posthumously by the British government as "British Heroes of the Holocaust" in 2010.

Omnibus
Over The Blue Mountains / Summer Lightning, Lucy Lamb / Doctor's Wife (1973) (with Sara Seale and Jill Tahourdin)
3 Great Novels By Mary Burchell (1975)
Tell Me My Fortune / A Scent Of Lemons / Country Of The Wine (1979) (with Jill Christian (Norrey Ford) and Mary Wibberley)
It's Rumored in the Village / Except My Love / Strangers May Marry (1983)
Just a Nice Girl / Pride of Madeira / Valley of Paradise (1983) (with Elizabeth Hunter and Margaret Rome)
The Hills of Maketu / Under the Stars of Paris / Every Wise Man (1986) (with Gloria Bevan and Jacqueline Gilbert)

Non fiction
We Followed Our Stars (1950)
aka Safe Passage