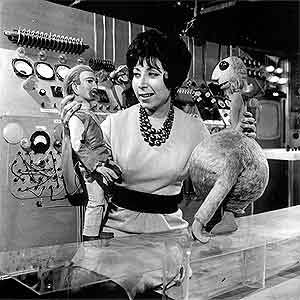 aka Rozella Lake, Rachel Lindsay, Janey Scott
Janey Scott was born in London and began writing with her first published romance novel in 1950. She continued publishing romance novels as Roberta Leigh, Rachel Lindsay, Roumelia Lane and Rozella Lake and as her maiden name Janey Scott. She was one of the first writers to introduce strong career-minded heroines who wouldn't be bossed around by the hero.She had her own film company and wrote and produced 7 TV series for children: Twizzle, Sarah & Hoppity, Torchy and Space Patrol etc. As well as writing the stories, Roberta Leigh also 'wrote' the music for her series, although this usually involved her humming or singing the tune into a tape recorder, after which someone else would arrange and write a score.