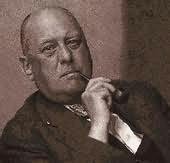 aka St E A of M and S
Aleister Crowley, born Edward Alexander Crowley, was a British occultist, writer, mountaineer, philosopher, poet, and mystic. He was an influential member in several occult organizations, including the Golden Dawn, the AA, and Ordo Templi Orientis (O.T.O.), and is best known today for his occult writings, especially The Book of the Law, the central sacred text of Thelema. He gained much notoriety during his lifetime, and was infamously dubbed "The Wickedest Man in the World."

Crowley was a chess player, mountain climber, poet, painter, astrologer, hedonist, bisexual, drug experimenter, and social critic. Crowley had claimed to be a Freemason, but the regularity of his initiations with the United Grand Lodge of England has been disputed.
Novels
The Magician (1908)
Moonchild (1923)

Novellas
The Testament of Magdalen Blair (1912)