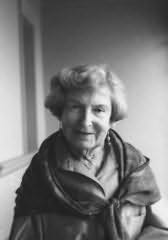 Australia (1917 - 2000)
Nancy Fotheringham Cato AM (11 March 1917 3 July 2000) was an Australian writer who published more than twenty historical novels, biographies and volumes of poetry. Cato is also known for her work campaigning on environmental and conservation issues.

Cato was born in Glen Osmond in South Australia, and was a fifth-generation Australian. She studied English Literature and Italian at the University of Adelaide, graduating in 1939, then completed a two-year course at the South Australian School of Arts. She was a cadet journalist on The News from 1935 to 1941, and as an art critic from 1957 to 1958.
Cato married Eldred De Bracton Norman, and travelled extensively overseas with him. They had one daughter and two sons.Dr Nancy Cato Norman died at Noosa Heads on 3 July 2000.
Cato's cousin was also named Nancy Cato and was host of children's TV show the Magic Circle Club in the mid 1960s.
Series
All the Rivers Run
1. A River Not Yet Tamed (2010)
2. Time Flow Softly (1959)
3. Still Glides the Stream (2013)
4. Towards the Final Shore (2013)
All the Rivers Run (1958)