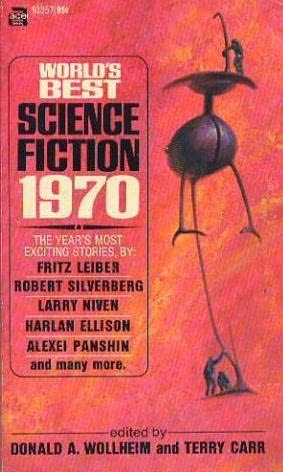 Here are stories of space exploration, strange human societies of tomorrow, adventures in the far future and compelling visions of world apocalypse. These are the finest stories of modern science fiction, a rich treasure of wonder to stay in your memory while the future continues to become the presents. The editors inform readers that the stories in this book were all published in 1969, and that the sixties were a period of turmoil and discovery for science fiction writers as it was of the world they were living in at that time. The stories themes and modes, even though they are about the future they believe, still reflect what was going on around the writers in the present. If there is doubt they suggest that readers consider the increasing use of near cinematic styles of pacing of the decade, a result of the movies emergence as a major art form and of television becoming a prime source of information. And also to consider the non-linear "new wave" styles of story construction that were tried, reflecting the gaudy imagery and unfettered imagination that abounded in the sixties. A compilation of the year's most exciting stories by: Fritz Leiber, Robert Silverberg, Larry Niven, Harlan Ellison, Alexei Panshin, Ursula K. Le Guin, James Tiptree, Jr., Suzette Haden Elgin, Keith Roberts, Bruce McAllister, Richard Wilson, Norman Spinrad, Michael G. Coney.