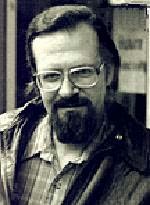 aka Carl Brandon, Norman Edwards
Terry Carr was born in 1937 and got involved in science fiction fandom soon thereafter. He was an outstanding fan writer and won the Fan Writer Hugo in 1973 and was a nominee for the Fan Writer Hugo in 1971 and 1972. Terry was one of the two SF bay area fans responsible for the famous hoax fan 'Carl Joshua Brandon' after whom the Carl Brandon Society takes its name.

He was also a science fiction writer though was principally known as an SF editor. The original Ace Science Fiction Specials series were a product ofhis skill, as is the revived line. He was also the editor of the best and longest running original anthology, Universe, as well as the most prestigious best-of-the-year collection. Terry lived in the San Francisco bay area and passed away in 1987.

Collections
The Light at the End of the Universe (1976)
Fandom Harvest (1986)
The God Machine and 4 Other Sci-Fi Masterpieces From the Golden Age (2012) (with Murray Leinster, Andre Norton and H Beam Piper)

Driftglass (1971)
Samuel R Delany
"One of the three finest science fiction stories of all time."