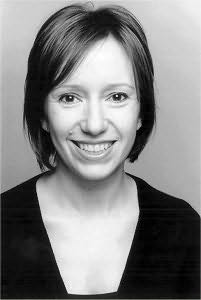 Fiona Dunbar was born in Hertfordshire, but grew up in Gerrards Cross, Bucks. She had a mis-spent youth, attending jazz clubs from about the age of eight with her singer/writer mother and jazz musician stepfather, and leaving school at sixteen to go to Art College. When Fiona realised she wouldn't be a famous artist, she embarked on a career in commercial art, doing storyboards for TV ads. But she found more creative expression in nightclubs like the Camden Palace, where she got to dance the night away in funky home-made clothes, alongside the likes of Boy George! Fiona eventually moved away from advertising work, illustrating for Punch, and for children's books. She also wrote and illustrated three picture books of her own (You'll Never Guess, My Secret Brother and Under the Stairs, all published by Hutchinson). In 1993 she moved to New York, newly married to Pano, an American lawyer. Their two children, Helena and George, were born there, and in 1997 the family returned to London.