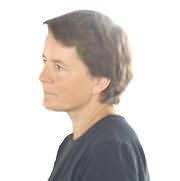 Canada (b.1960)
Deborah Ellis was born in Cochrane, Ontario, Canada in 1960. She won the Governor General's Award for English language children's literature for her first novel, Looking for X. Ellis said that she decided to start writing when she was 11 or 12. Ellis is an active anti-war activist and feminist, and has written many children's books which reflect this. She travelled to Afghanistan in 1997 to interview women in refugee camps, from these interviews she wrote the trilogy which includes The Breadwinner (Parvana), Parvana's Journey, Mud City, and an adult book Women of the Afghan War. While The Breadwinner was inspired by an interview with a mother in a refugee camp, the subsequent books in the trilogy were more imaginative explorations of how children would survive. She also wrote a book with Eric Walters about the plotted terrorist attacks in Canada. The book is called Bifocal, highlighting two boys and their sides to the story about what happened. Bifocal is a book about racism and rooting terrorists in Canada.

Our Canadian Girl: Keeley
1. The Girl from Turtle Mountain (2004)

Collections
Lunch with Lenin and Other Stories (2008)