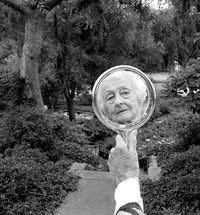 A granddaughter of California railroad magnate and noted collector of art and rare books, Henry Edwards Huntington, Doerr grew up in a Pasadena, California, family that encouraged intellectual endeavors. She enrolled in Smith College in 1927, but transferred to Stanford University the following year. In 1930, after her junior year, she left school to marry Albert Doerr, Jr., a Stanford '30 graduate whom she had known in Pasadena. The Doerrs spent the next 25 years in Pasadena.

Albert Doerr's family owned a copper mine in the Mexican state of Aguascalientes, and in the late 1950s, the Doerrs moved to Mexico where Albert was engaged in restoring the mine. They remained until 1972, when Albert died ten years after being diagnosed with leukemia. The time she spent in this small Mexican mining town would later provide her with the subject matter and settings for much of her writing.

Following her husband's death, Harriet Doerr returned to California. At the suggestion of her son Michael, she decided to finish the education which had been interrupted so long before by her marriage. She enrolled once again at Stanford, and in 1977, received a BA in European history. While at Stanford she began writing and earned a Stegner Fellowship in 1979. She soon began publishing short stories.

Her first novel Stones for Ibarra was published in 1984 and won that year's National Book Award for First Work of Fiction. Her second novel, Consider this, Senora, was published in 1993, and a collection of short stories and essays, Tiger in the Grass: Stories and other Inventions followed in 1995. A television adaptation of Stones for Ibarra was presented by Hallmark Hall of Fame in 1988.

Collections
The Tiger in the Grass (1995)