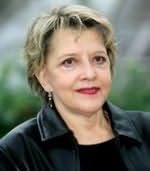 Croatia (b.1949)
Slavenka Drakulić is a noted Croatian writer and publicist who currently lives in Sweden.Slavenka Drakulić was born in Rijeka, Croatia, (in what was then socialist Yugoslavia). She graduated in comparative literature and sociology from the University in Zagreb in 1976. From 1982 to 1992 she was a staff writer for the Start bi-weekly newspaper and news weekly Danas (both in Zagreb), writing mainly on feminist issues.
Novels
Holograms of Fear (1992)
Marble Skin (1994)
TheTaste of a Man (1997)
S (1999)
aka As If I Am Not There
Frida's Bed (2008)

Speak, Silence (2021)
Kim Echlin
"Between 1991 and 1995, an estimated 60,000 women were raped in wars in the former Yugoslavia. But the women did not allow these rapes to become an historical footnote or ‘collateral damage.’ They witnessed their ordeal in The Hague's International Tribunal. Thanks to these women, the world understood—for the first time—rape as a weapon of war and found the accused guilty of a Crime Against Humanity. This carefully researched and well-crafted novel, based on these true events, is an impressive monument to the victims."
Visitors to this page also looked at these authors
Paul Theroux
John Sandford
Will Thomas
Charlie Jane Anders
Mark Lawrence
Bridget Foley
Ann Bennett
Rikki Ducornet
Goldy Moldavsky
Jack Carr
Rachel Wesson
Maria Kuznetsova
Alicia Beckman
Angela Jackson-Brown
Miro Gavran
Richard Flanagan