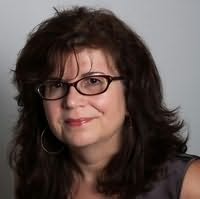 Dee Ernst was born Elizabeth Diane Ascoli in Newark, NJ. Her family moved to Morristown, NJ when she was still a toddler. She started writing stories on a battered Royal typewriter when she was about ten or twelve, and she graduated Morristown High School determined to pursue a career as a writer in some form or another (she considered advertising, but luckily came to her senses). Creative writing majors were hard to find in 1974, so she attended Marshall University as a journalism major. That wasn't working, so she tried Education, but that didn't quite work either. Several jobs and years later, staying home with a three-year-old and trying to figure out what to do when she grew up, Joan Hamburg on WOR radio in New York was interviewing someone who said if you wanted to know what to with your life, remember what you were playing when you were ten, and try to turn that into a career. Since Dee was writing stories at ten, she sat down and wrote her first novel. It went nowhere. Her second novel got her a terrific agent and upwards of fifteen rejection letters (She reread them all in preparation of this biography). Her third novel, Better Off Without Him, garnered even more rejection letters from a much higher caliber of editor. Undaunted, she self-published Better Off Without Him in October 2010. She is now waiting patiently for fame and fortune.
Series
Mt. Abrams Mystery
1. A Mother's Day Murder (2015)
2. A Founders' Day Death (2016)
3. A Killer Halloween (2016)
4. A Deadly New Year (2016)
5. A Malicious Midwinter (2017)
6. A Fatal April Shower (2017)