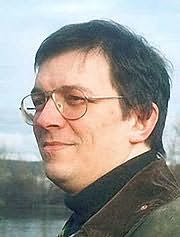 (b.1959)
Andreas Eschbach is a German writer who mostly writes science fiction. Even if some of his stories do not exactly fall into the SF genre, they usually feature elements of the fantastic.

Eschbach studied aerospace engineering at the University of Stuttgart and later worked as a software engineer. He has been writing since he was 12 years old. His first professional publication was the short story Dolls, published in 1991 in German computing magazine C't. His first novel was published in 1995. Five of his novels have won the Kurd-Laßwitz-Award, one of the most prestigious awards in the German SF scene.

His novels have also been translated into a number of languages, including English, French, Italian, Russian, Polish, Turkish and Japanese.
Novels
The Carpet Makers (2005)
Lord of All Things (2014)
One Trillion Dollars (2014)
The Hair Carpet Weavers (2020)