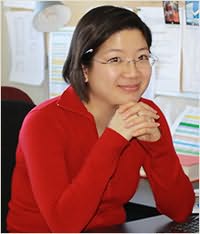 (pseudonym) is a romance writer in Toronto, Canada. Shed never read what she used to call a real romance book until she started working at Harlequin Enterprises, the worlds largest publisher of womens fiction, as a proofreader.

After reading her first few romance novels, she thought, If they can do it, so can I! After all, she believed, like so many people still do, that romance was based on a formula, that anyone could write a romance and that Theyll publish anything!

After the first year of writing and attending workshops, she couldnt believe how naïve shed been. It took three years of grueling work before she finally sold her third book, Fighting for Her Love (retitled Her Sons Hero for publication), to Harlequin Superromance. In that time, she also made the finals in the Toronto Romance Writers' Golden Opportunity Contest in 2009 and won in the Contemporary Series Category in 2010.

She now challenges anyone who believes romance is easy to write to write their own book and try to get published in one years time.

Vicki has lived in Toronto all her life. She has a Bachelor of Journalism from Ryerson University in Toronto. Shes a big Star Wars nerd (original, not prequel), and loves comic books, science fiction and fantasy, vintage video games, and the anthropological study of online culture, social protocols and communication trends (aka surfing the internet).

She was an avid fan fiction writer and attributes much of her success to those early works and the encouragement and support she received from the many fans and readers of her stories. *waves hi to the A:TLA communityyou know who you are*

Her advice to anyone who wants to be a writer: WRITE.