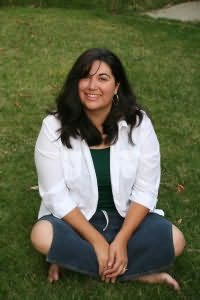 aka Alexx Andria
An avid reader since before she can remember, Kimberly Van Meter started her writing career at the age of 16 when she finished her first novel, typing late nights and early mornings, on her mother's old portable typewriter.

Although that first novel was nothing short of literary mud, with each successive piece of work her writing improved to the point of reaching that coveted published status.

A journalist (who during college swore she'd never write news), Kimberly has worked for both daily and weekly newspapers, covering multiple beats including education, health and crime, but she always dreamed of writing novels and someday saying goodbye to her nonfiction roots.

Born and raised in scenic Mariposa, CA, Kimberly knows a thing or two about small towns--preferring the quiet, rural atmosphere to the hustle and bustle of a busy city anyday--but she and her husband make their home in Oakdale, which represents a compromise between the two worlds.

Kimberly and her husband, John, met and fell in love while filming a college production. He was the camera operator and she, the lead actress. Her husband often jokes that he fell in love with his wife through the lens of a camera. A year later they were married and have been together ever since.

In addition to writing, reading, and drinking hot chocolate by the windowsill when it rains, Kimberly enjoys photography and is the resident photographer for every family event, including weddings and new babies. The photographs gracing the walls of their home are comprised almost entirely of shots Kimberly has captured, whether on the job or just playing around with the camera.

The oldest of four siblings and the mother of three children, Kimberly divides her time between soccer games, swim meets, bottle feedings, and deadlines.

Series contributed to
Going Back
10. The Truth about Family (2006)