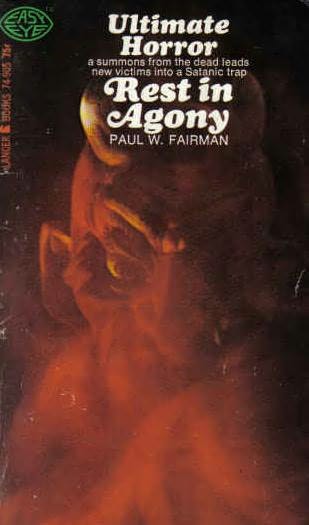 TRAPPED IN THE MESHES OF THE PRINCE OF DARKNESS Here is a keystone work in the development of the modern horror novel first published in the early 1960s. When Ambrose Sampson dies, everyone in the family considered him the next-best thing to a saint, including his college-grad nephew, Hal. So Hal is outraged when a stranger knocks at the door and tries to strong-arm his way into the house, demanding a work supposedly written by his uncle titled "The Book of Ambrose" and hinting at his uncle's involvement in something dark and sinister. But Hal's outrage turns to horror when he answers the phone and hears a ghostly but familiar voice say, "Hello, Hal. This is your uncle Ambrose." Hal's horror deepens when he learns his beloved uncle was a practitioner of Satanism and had pledged Hal's sister, Lisa, to the mighty Prince of Darkness. However, Ambrose has repented and begs Hal to help him oppose the forces of darkness he unleashed. Only then can he rest in peace and not in agony! Hal agrees, not knowing that he will face temptations and dangers rarely experienced by mortal men: For in his future like the perils of the House by the Devil's Bend, the Place of Pain, and the Goddess of Dark Waters, along with the unholy temptations of Caress Dillon and Amora Cartwright. And if he survives those, Hall will still have to face the combined forces of a Satanic cult and the awesome power of the Prince of Darkness himself. "Swift-paced, memorable characters," Suspense magazine.