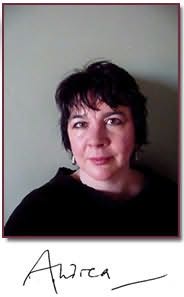 Andrea Gillies was born in York of a Yorkshire mother and proudly Scottish father and went to St Andrews University, via a three year stint living in Australia. She has had a peculiar career, encompassing theatre programme writing, publicity work, the editorship of the Good Beer Guide, travel and reference book editing, and writing a drinks column for Scotland on Sunday newspaper. She's spent most of the last eighteen years having and raising children, and latterly, living in a big Victorian house on a remote peninsula in northern Scotland and caring for her mother-in-law through the middle stages of dementia, a period documented in her book KEEPER which won the Wellcome Trust Book Prize in 2009. The book also won the Orwell Book Prize 2010, was shortlisted for the BMA Popular Medicine Book Prize 2010, and was published by Broadway Books (Random House) in the US in August 2010. Spanish, Polish, Turkish and Taiwanese editions were released in 2011.

Andrea's first novel, entitled THE WHITE LIE, about an aristocratic family and their secrets, was published by Short Books in February 2012. She lives in Edinburgh with her family.
Novels
The White Lie (2012)
The Enlightenment of Nina Findlay (2012)