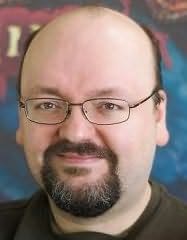 Canada (b.1971)
David Gaider lives in Edmonton, Alberta, and has worked for video game developer BioWare since 1999. He is the lead writer on the upcoming Dragon Age: Origins role-playing game and has previously worked on such titles as Baldur's Gate 2: Shadows of AmnTM, Star Wars ®: Knights of the Old Republic TM, and Neverwinter Nights TM.