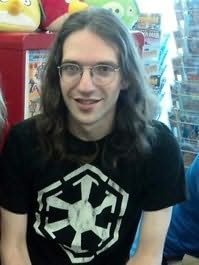 Since 2002, Alexander Marsh Freed has worked as a writer and editor in the fields of video games, comic books, and prose fiction. Now freelance, he has contributed to dozens of works ranging from mass market games of record-setting scope to critically acclaimed small press anthologies.

From 2006 to 2012, Freed was part of the in-house writing staff at video game maker BioWare, where he wrote primarily for the Star Wars: The Old Republic online role-playing game (one of the largest entertainment products in history). His major contributions included the game-length Imperial Agent storyline, along with extensive editorial and design work. He served as Lead Writer for the project during and after launch, shaping the overall direction of the games ongoing fiction.

BioWares Star Wars and Dragon Age video games also served as the basis for Freeds first comic books. Since 2010, he has regularly published works through Dark Horse Comics, beginning with Star Wars: The Old Republic Blood of the Empire.

Freeds original prose fiction has appeared in Interzone magazine and anthologies such as The Book of More Flesh (an International Horror Guild Award nominee and Origins Award finalist), while his franchise fiction has been published in Star Wars Insider. His traditional pen-and-paper game design work has been nominated for multiple Gen Con EN World RPG Awards and been reprinted in Monte Cook Presents: The Years Best d20.

As of this writing, he lives in Austin, Texas and refers to himself in the third person. He is an avid roller skater and eater of mangos.