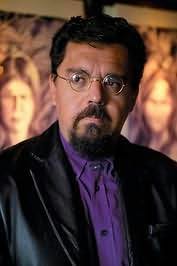 Gansworth is an enrolled citizen of the Onondaga Nation; however, he grew up in the Tuscarora Nation as a descendant of one of two Onondaga women present among the Tuscarora at the foundation of the nation in the 18th century. Gansworth originally qualified in electroencephalography, considered a profession useful to his nation; however, he went on to study literature and to continue a lifelong interest in painting and drawing.

Gansworth has written five novels, including the award-winning Mending Skins (2005) and Extra Indians (2010). In all his novels, illustrations form an integral part of the reading experience. His most recent novel, If I Ever Get out of Here is his first Young Adult novel, and deals with the 1975 friendship between two boys, one a resident of the Tuscarora Nation, the other living on the nearby Air Force base. In a starred review, Booklist stated that the book succeeded in "sidestepping stereotypes to offer two genuine characters navigating the unlikely intersection of two fully realized worlds."
Novels
Indian Summers (1998)
Mending Skins (2005)
Extra Indians (2010)
If I Ever Get Out of Here (2013)
Give Me Some Truth (2018)