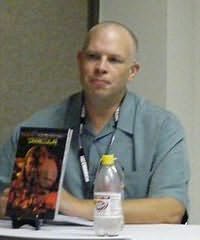 (b.1971)
Jason Henderson is a writer of computer games, novels and several comic book series.He is the writer of the young adult novel series Alex Van Helsing from HarperCollins and the comic book series Sword of Dracula from Image Comics, Strange Magic from Marvel Comics, and Soulcatcher. His book Alex Van Helsing: Vampire Rising was added to the 2011 Texas Library Association Lone Star Reading List, a list of the top 20 books published in the previous year for middle grade readers.He was the writer of Locus best-seller The Element of Fire, the first novel in the Highlander (franchise), and was a co-creator on the Tokyopop manga series Psy-comm.Henderson lives in Texas. He graduated from the University of Dallas in 1993 with a BA in History and from Catholic University's Columbus School of Law in 1996 with a JD degree in Law.

Series contributed to
Highlander
2. The Element of Fire (1995)