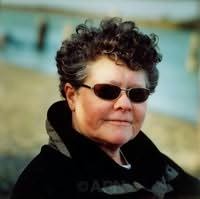 New Zealand (b.1947)
Keri Hulme was a writer in residence at Otago University in New Zealand in 1978, and in 1985 at the University of Canterbury. Her first novel The Bone People won the Booker Prize in 1985. Hulmes other works include The Windeater / Te Kaihu (1982), a collection of short stories, and Homeplaces (1989), her homage to three coasts of the South Island. She lives in New Zealand.

By 1985 Keri Hulme had already won several New Zealand awards for her writing, including the Katherine Mansfield Memorial Award (1975), the Maori Trust Fund Prize (1977), the ICI Writing Bursary (1982) and the New Zealand Writing Bursary (1983). The bone people, her first novel, was awarded both the Mobil Pegasus Award and the New Zealand Book Award for Fiction in 1984, the year of its first publication.
The shortlist for the Booker Prize was announced on 30 September 1985. Hulme's The bone people was up against Illywhacker by Peter Carey, The battle of Pollocks Crossing by J.L. Carr, The good terrorist by Doris Lessing, Last letters from Hav by Jan Morris and The good apprentice by Iris Murdoch. Hulme didn't think her novel stood a chance against the competition and she wasn't alone: London bookies had The bone people at 5-1 odds. Their favourite was Lessing's The good terrorist. Meanwhile, Carey's publishers were so confident that they had a copy of Illywhacker ready to be reprinted with Winner of the Booker Prize 1985' on the cover.
The decision was far from unanimous. Indeed, 1985 consistently appears on lists of Booker controversies and 'jury bust-ups'. Actress Joanna Lumley, who was on the judging panel, abhorred The bone people, believing it glorified violence against children. She could not attend the final judging but sent in her comments in advance and asked that she be contacted 'if it got to a scramble'. Booker's administrator, Martyn Goff, read out her comments in the face of opposition from the chair, politician Norman St John Stevas, who did not believe Lumley should have been on the panel in the first place. The panel was reportedly divided between Hulme's novel and Carey's, but Lumley was not called in. She was furious when she discovered that The bone people had been declared the winner.
Novels
The Bone People (1985)
Lost Possessions (1985)
Bait (1999)