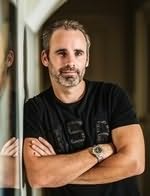 New Zealand (b.1974)
Paul was born in Christchurch, New Zealand, in 1974, and for as long as he can remember has always wanted to be a writer. His short stories written at school always gave his teachers concerns, and his High School report cards stated there was a time and a place for his kind of writing - and school wasn't it.

At nineteen, Paul began work on his first few novels will never be allowed out of the bottom drawer. At twenty-four he began work on The Killing Hour and The Cleaner. A year later he left his job of seven years to write full time. Without any income, he was forced to make a decision - get another job or sell his house. He sold his house and continued to write.

In 2006 The Cleaner was released, and introduced Joe, a serial killer who works as a janitor at the Christchurch Police Department, to the world. It became an international bestseller in 2007.

Paul is currently working on his fourth book, and at this stage isn't giving anything away, other than the fact that 2006's The Cleaner and 2008's Cemetery Lake both end on the exact same day. His fourth book picks up exactly where those two books end.