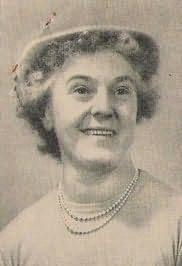 (1902 - 1991)
Lorna was born in Durham City, England. She was educated at Durham Hill School for girls and Le Manoir on the shores of Lake Geneva, Switzerland.

This was a finishing school at Lausanne. Lorna obtained her BA at Durham University, which is where she met her future husband, a clergyman.

They were married at Newcastle Cathedral and four years later he was posted to a remote vicarage at Matfen, in Northumberland.