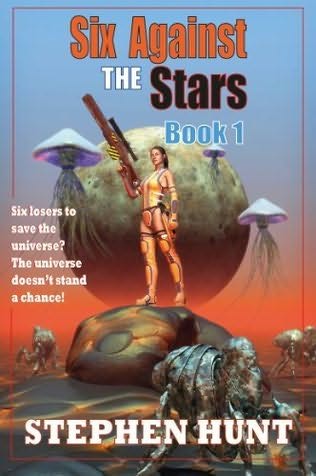 Six Against the Stars Book 1

As the self-proclaimed biggest coward in the galaxy, Horatio has it easy on what passes for 40th century America. A much-favoured sycophant in the court of the King of Earth, Horatio

lives in a genetically engineered paradise where there's a vat-grown slave waiting around every marble column with a bunch of grapes to drop into his oh-so perfectly designed mouth.

Unfortunately for Horatio, the artificial intelligence that rules the great mass of humanity spread across the stars has other plans for this feckless seducer. So, if you ever wonder

how the galaxy's biggest coward finds himself actually trying to save it, you're not alone... but then, unfortunately, neither is our hero!

His misadventures are abetted by a psychotic Martian warrior, a robot who thinks it's related to Sherlock Holmes, a beautiful genetically enhanced assassin, a scientist with a

computer for a brain, and a millennia-old clone who was alive when the last U.S. President was executed by a firing squad.

'Hunt's imagination is probably visible from space. He scatters concepts that other writers would mine for a trilogy like chocolate-bar wrappers.'
- TOM HOLT

'All manner of bizarre and fantastical extravagance.'
- DAILY MAIL

'Compulsive reading for all ages.'
- GUARDIAN

'Studded with invention.'
-THE INDENDENT

'To say this book is action packed is almost an understatement... a wonderful escapist yarn!'
- INTERZONE

'An inventive, ambitious work, full of wonders and marvels.'
- THE TIMES

'Hunt knows what his audience like and gives it to them with a sardonic wit and carefully developed tension.'
- TIME OUT

'A ripping yarn ... the story pounds along... constant inventiveness keeps the reader hooked... the finale is a cracking succession of cliffhangers and surprise comebacks. Great fun.'
- SFX MAGAZINE

'Put on your seatbelts for a frenetic cat and mouse encounter... an exciting tale.'
- SF REVU

Age 15+ - mild violence and some scenes of sex and nudity.

Used availability for Stephen Hunt's Six Against the Stars Book 1