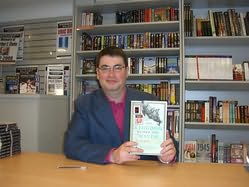 Stephen Hunt (born in Canada) is a British author best known for his fantasy novel For the Crown and the Dragon which won the 1994 WH Smith New Talent Prize.

This book was also voted best fantasy novel of 1994 by the readers of the British genre gaming magazine Roleplayer Independent. Hunt's short fiction has appeared in various mainly US and UK-based genre magazines, and some of his earliest works were written in the cyberpunk sub-genre of science fiction.

Genres: Science Fiction, Fantasy
Series
Triple Realm Duology
1. For the Crown and the Dragon (1994)
2. The Fortress in the Frost (2020)

Agatha Witchley Mystery
1. In the Company of Ghosts (2011)