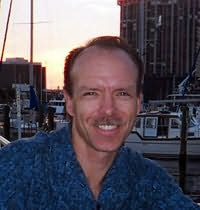 Chris A. Jackson fell in love with the sea the first time he set eyes on those majestic waves. As a youth, he spent summers working on his fathers fishing boat in Oregon. Trained as a marine biologist, he was sidetracked by a career in biomedical research, but regained his heart and soul in 2009 when he and his wife Anne left the dock aboard a 45-foot sailboat to cruise the Caribbean and write fulltime. His acclaimed Scimitar Seas nautical fantasies won three consecutive Gold Medals in the ForeWord Reviews Book of the Year Awards. His repertoire also includes six more fantasy novels, and several short stories published in anthologies. Shooting from the sea to the stars, Chris now has a triad of science fiction/humor novellas available.