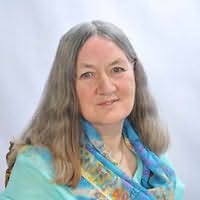 Sheila Jeffries made a considerable contribution to children's literature when she was very young. She wrote four full length children's novels which were published before she left school. Written under her maiden name SHEILA CHAPMAN, in the popular 'pony story' genre of the time, the books continued to sell worldwide until the eighties. After studying at Bath Academy of Art, Sheila trained as a teacher and spent many happy years teaching Special Needs Children in London and Sussex. She began to write full time in 1982 under the name SHEILA HAIGH , found herself an agent , and had eight more children's books published by Methuen, Blackie and Scholastic. A more recent project was a commissioned Mind Body Spirit book, TALKING TO FAIRIES, published by Element.