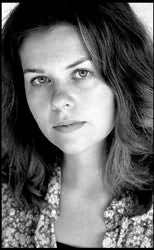 Aryn Kyle grew up in Grand Junction, Colorado, and received her MFA in fiction from the University of Montana. Her writing has appeared in The Atlantic Monthly, Ploughshares, The Georgia Review, Best New American Voices 2005, Best American Short Stories 2007, and elsewhere. Aryn is the recipient of a Rona Jaffe Award and a National Magazine Award in fiction. She lives in Missoula, Montana.
Novels
The God of Animals (2007)

Who By Fire (2008)
Diana Spechler
"Impossible to put down. Who By Fire is a remarkable tale about fera and forgiveness and the bonds that hold a family together even as its members are falling apart. It's a beautiful novel."