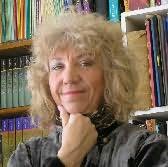 (b.1949)
Elizabeth Kay, born July 9, 1949 in London, is an English writer. She is the author of The Divide trilogy, a series of children's fantasy novels.

She went to art school and in her mid-twenties started writing radio plays, which were broadcast on BBC Radio 4. She also wrote stories which were published in newspapers and magazines and broadcast on Capital Radio in London.

Kay has an MA (Distinction) in Creative Writing from Bath Spa University, and has taught both Creative Writing and Art for a number of years. She has illustrated several books and produced nearly all the artwork for her own website. An avid wildlife enthusiast, she has travelled extensively to places as diverse as the Ivory Coast, Borneo, Iceland and India.

The Divide, her first book for children, was published in 2003. She was a keynote speaker at Accio 2005, the Harry Potter conference, and spoke at a children's book conference in Ukraine in 2007. She has appeared at other literary events, including the Cheltenham and Edinburgh festivals.She has two grown-up daughters.