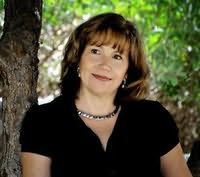 A pseudonym used by Jennifer Apodaca
Jennifer Lyon grew up under the shadow of the Matterhorn at Disneyland in Anaheim, California. She attended Walt Disney elementary school and her very first playmate was her beloved dog, Duke, who was cast in the role of hero in all their many adventures.Imagination was never a problem for Jen! She discovered books at a very young age and read voraciously.

Many years later, Jen met her real life hero at the dog pound, married him and they had three sons. She went back to school to get her degree, and pursued her passion of writing. Eventually writing won out over a degree and she began to write full time.en has penned the award winnining Samantha Shaw mystery and several other romantic mysteries under the name Jennifer Apodaca.