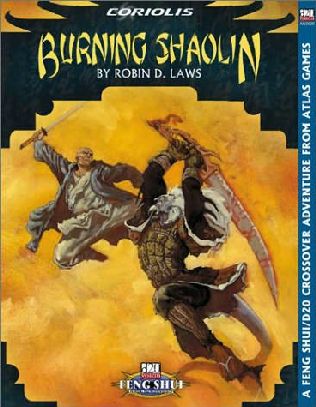 You live in a time when corrupt eunuch officials undermine the once-great ruling Dynasty; when martial artists, white-bearded old masters, and supernatural creatures struggle for control of powerful chi forces; when a band of honorable warriors is called upon to battle a demon sorcerer in a legendary mountain monastery...

...this is one demon in dire need of some Kung Fu butt kicking!

Burning Shaolin is a dual-system d20/Feng Shui adventure, the first in the Coriolis line of dual-system roleplaying game supplements. It includes:

* Complete rules for playing the scenario with either an existing 6th- to 8th-level d20 group, or beginning Feng Shui characters.

* New d20 rules for fast-paced action movie-style combat: "Faceless Horde" rules provide large groups of opponents for the heroes to bowl quickly through, in large part to show off how buff the PCs are; the wuxia combat rules let d20 characters defy gravity and perform the stunts Feng Shui is known for.