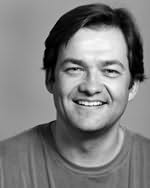 Denmark
Christian Mørk has always told stories. Born into a family of actors, he realized when he was quite young that he'd rather tell the tales himself than interpret other people's words on stage. But he sucked in the words. From Richard III to Faust.

So he next went to New York City, where he spent enough time riding along with the police department and the ambulance services, and scouring the darkest alleyways he could find to attain his master's degree in 1992 from the Columbia Graduate School of Journalism. He was awarded the Henry N. Taylor Award as the best foreign student in his class for his thesis "Alien Nation," which dealt with the lives of illegal Irish immigrants in New York. He began formulating ideas for a book. But it still wasn't ready to tell it.

Before he could work on it, he got a job at VARIETY, the entertainment industry's trade paper of record, where he first covered independent and European film before moving to Los Angeles. Once there, he was quickly headhunted by Warner Bros. Pictures then-President of production Bruce Berman, who gave him the chance to learn the movie production trade. He was given an office on the Warner lot, and couldn't believe it.

For the next several years, Christian was awash in stories - but they were still other people's stories. He was involved in the production of small art pictures, such as Neil Jordan's Michael Collins and The Butcher Boy, and also held a hand in the making of bigger blockbusters like Eraser, The Devil's Advocate, and Outbreak.

Christian moved back to New York City, and began to write stories for The New York Times, interviewing directors like Wes Anderson (Darjeeling Limited) and Bennett Miller (Capote), while preparing to make the leap from journalist to novelist.
Novels
Darling Jim (2009)