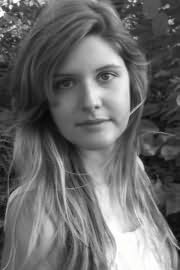 Anna Noyes is the author of the debut short story collection, Goodnight, Beautiful Women, forthcoming from Grove Atlantic in June 2016, and from Atlantic Books in the UK in November. She is a recent graduate of the Iowa Writers' Workshop, where she received the Richard E. Guthrie Memorial Scholarship. Her fiction has appeared in Vice, A Public Space, and Guernica, among others. She has received the Aspen Words Emerging Writer Fellowship, the James Merrill House Fellowship, and the Lighthouse Works Fellowship, and has served as writer-in-residence at the Polli Talu Arts Center in Estonia. Goodnight, Beautiful Women received the Henfield Prize for Fiction and the Lotos Foundation Prize, and has been selected by the Barnes and Noble Discover Great New Writers program and Indie Next Great Reads. Noyes was raised in Downeast Maine.
Collections
Goodnight, Beautiful Women (2016)

The Far Field (2019)
Madhuri Vijay
"I am in awe of Madhuri Vijay. With poised and measured grace, The Far Field tells a story as immediate and urgent as life beyond the page. I will think of these characters - tender and complex, mysterious and flawed, remarkably real to me - for years to come, as though I have lived alongside them."