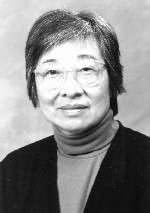 (b.1929)
Namioka was born in Beijing, the daughter of linguist Yuenren Chao and physician Buwei Yang Chao. The family moved often in China. In 1937, the Chaos were living in Nanjing, and fled westward in the face of the Japanese Invasion. They eventually made their way to Hawaii, then Cambridge, Massachusetts. Namioka attended grade school in Cambridge and excelled at mathematics.

In 1959, the Namiokas' first daughter Aki was born, followed by a second daughter Michi, who was born in 1961. The family moved to Seattle in 1963, when Isaac Namioka accepted a position at the University of Washington.
Series
Zenta and Matsuzo Samurai
The Samurai And The Long-nosed Devils (1976)
White Serpent Castle (1976)
Valley Of The Broken Cherry Trees (1980)
Village Of The Vampire Cat (1981)
Island of Ogres (1989)
The Coming of the Bear (1992)