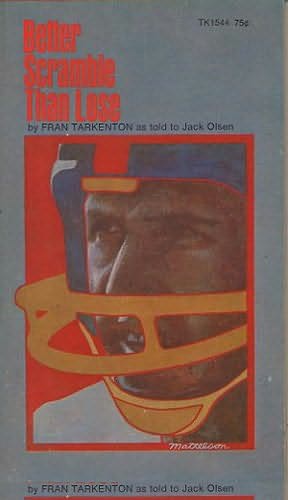 (1968)
A non fiction book by Jack Olsen and Frank Tarkenton

Some newspaper guy called him "The Scrambler," and the name stuck. But ask Fran Tarkenton why he scrambles, and he'll tell you he doesn't ... unless he has to!-and even then it's only about once in thirty plays. Fran explodes a lot of other myths about himself and about pro football- myths that even some of the smartest coaches swear are true: that pro football players play harder when the money is bigger; that the opposing team usually tries to "get" your star player; that a great quarterback can make any team a winner. Here's the thrilling, true story of one of the game's young "old pros." A minister's son they thought was too soft for the big time until they played on his team!