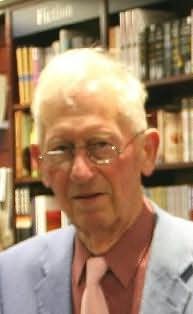 (b.1925)
Husband of Ann Purser
Philip Purser saw army service in the final days of WWII and in occupied Germany before toying with the idea of becoming an engineer. Journalism claimed him instead, first in Scotland and then Fleet Street. He is perhaps best known as the long-serving television critic for the Sunday Telegraph, but apart from novels he has also written television dramas, radio plays and biographies. His thriller Lights in the Sky, published in 2005, was a "rather belated" follow-up to Night of Glass. His thrillers are all marked by skilful, unfussy story-telling and a blend of suspense and farce similar to early Hitchcock, where un-heroic characters are forced by circumstances to perform very heroic deeds. He is married to crime writer Ann Purser.
Novels
Peregrination 22 (1962)
Four Days to the Fireworks (1964)
The Twentymen (1967)
Night of Glass (1968)
The Holy Fathers Navy (1971)
Lights in the Sky (2004)